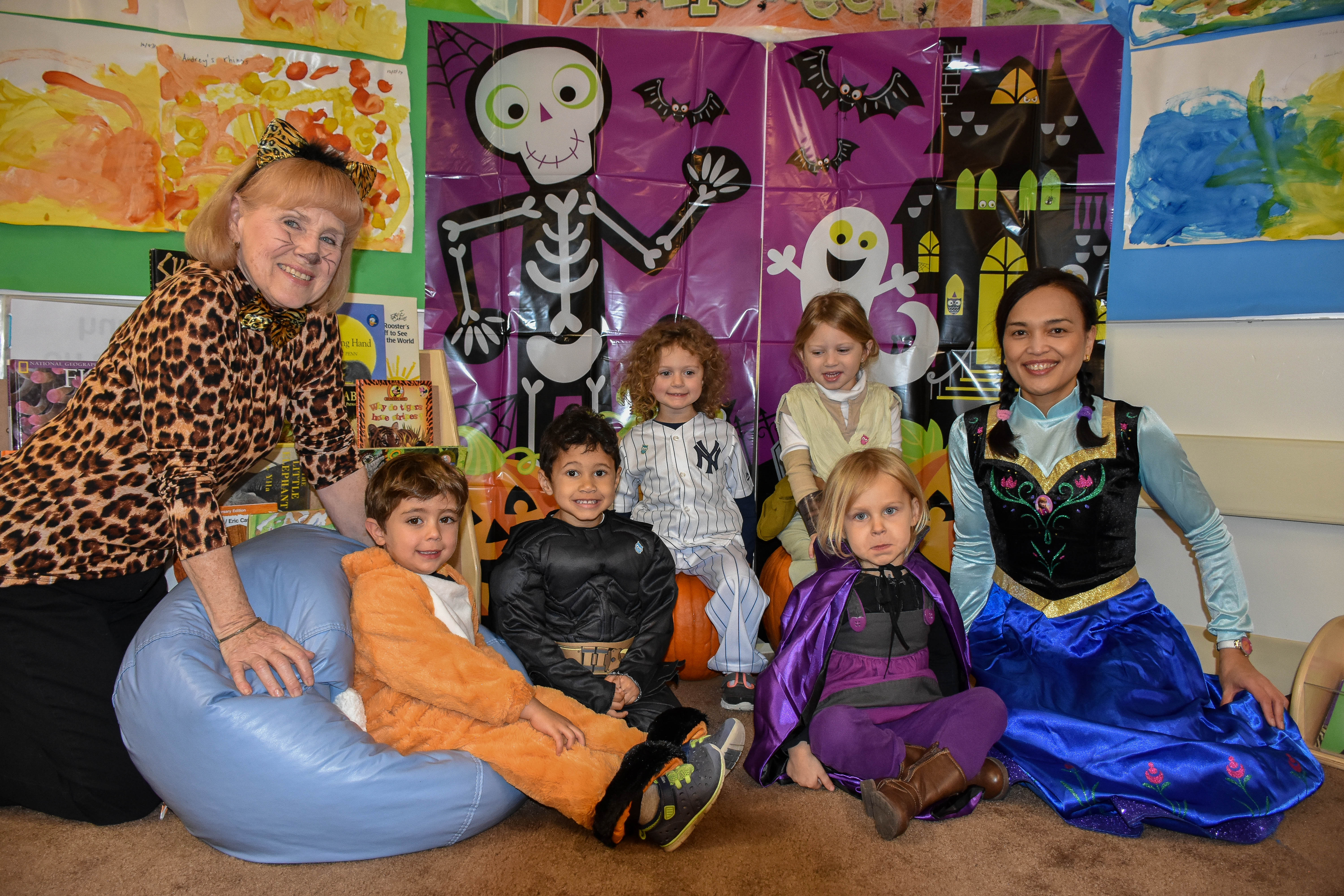 On October 26 and 27, the Preschoolers had a “Make Believe Day” parade and party in the Zoo.  So many people participated to help make this a fabulous event for all!

A number of parents brought in different materials and items to decorate the classroom. Mr. Ethan, one of our parents, and Ms. Lynda, our preschool docent, worked closely together to decorate. The classroom was ready on time with festive decorations of pumpkins, skeleton, spiders, and spider webs.

During the days of the event, we were so excited to see everyone in costumes while we played a game of “Guess Who I am Dressed As”. For the Tuesday-Thursday class, the children dressed up as Batman, a Yankee player, a fox, a nice witch, and Rey in Star Wars. Ms. Pati dressed up as a Cheetah. The children giggled when they finally found out that Ms. Anna was dressed up as Anna from the movie, Frozen!

For the Mon-Wed-Friday class, the children dressed up as Creek the troll, a Squishy ball, Gekko in PJ masks, Wonder Woman, Buzz Lightyear, Tinker Bell, a Purple Octopus, and Gord Downie of the Tragically Hip band. Ms. Barb dressed up as a witch. The parents and siblings had spooky accessories and costumes, too. Our favorites were the LEGO couples and the panda bear!

Two of our Preschool parents, Ms. Maureen and Ms. Andrea, were our Mystery Readers. They read, “Which Would You Rather Be?” by W. Steig. The book was about a clever bunny meeting up with two children guessing what items would be coming out of the bunny’s magic hat. The children were amused in choosing which they’d rather be in each page of the book.  It was a great way to jump-start the day!

Before we went out “Trick or Treating,” we talked about some rules to keep the day safe and fun for everyone.  Family members came along with us during the parade. Mr. Christian, the Zoo’s PR Manager, took our photos and handed out lots of candies from the Administration Department.  We stopped by and scared the Education staff on the first floor then met with Erie 1 BOCES high school students, our book buddies on Zoo grounds, for some yummy treats!

Back in the classroom, we sang and danced to “The Skeleton Dance” and “Five Little Pumpkins.”  We also played the games, “Who Took the Candy from the Trick or Treat Jar?” and “I See Colors Everywhere!” The parents participated in finding classroom toys and items to match a color. The children were definitely proud to show their loved ones what they are learning in school. In addition, I was thrilled to prepare special activity stations such as “Pin the Face on the Pumpkin,” bean bag toss, and decorating neon cups with foam stickers for the children.  There were also two parents, Ms. Johnna and Ms. Tanika, who put together two unique activities, the Pumpkin Patch and Poke the Pumpkin. The kids enjoyed seeing their families in the classroom as well as playing games with them.  We ended the day by disco dancing and then showed family members how to do the train dance.  It was a blast seeing them hop in line and dance to the music!

Thank you to everyone for celebrating this “spine-chilling” event with us. We hope to spook you again next year!