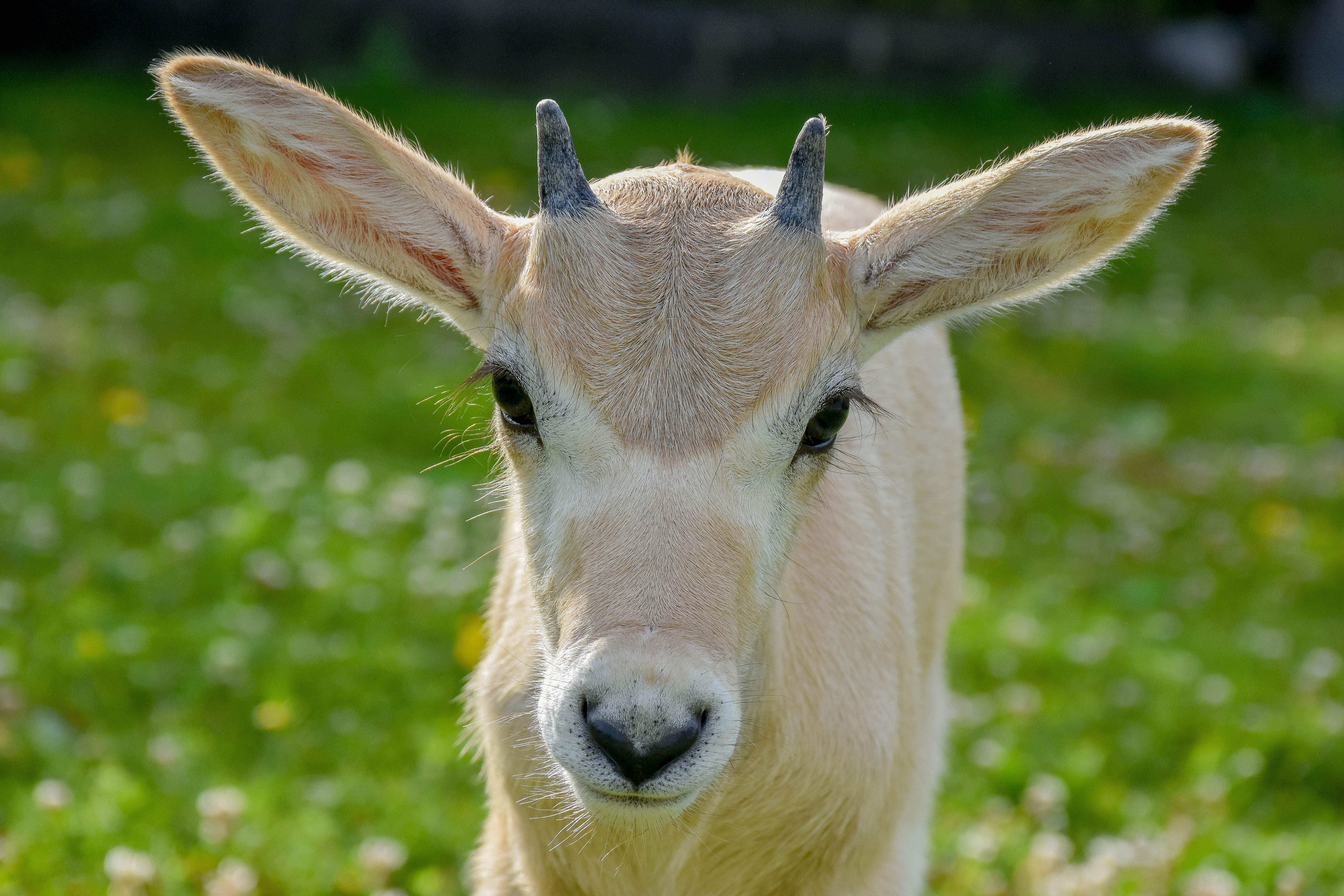 Meet “Pumpernickel”, the Buffalo Zoo’s newest addition to the addax herd. They are a large ungulate able to reside in areas of extreme desert temperatures. Addax are listed as Critically Endangered because the total wild population is estimated to number under 100 of mature individuals.  Addax were formerly widespread in the Sahelo-Saharan region of Africa, west of the Nile Valley, and present in suitable habitats and all countries sharing the Sahara Desert.  However, they may now be regionally extinct in Algeria, Egypt, Libya, Morocco, Sudan, Tunisia, Western Sahara and possibly Mauritania.  The decline in numbers is attributed to habitat loss and uncontrolled hunting over many years.

Pumpernickel was born to Samonya in the early morning on June 14, 2017.  Samonya had been a good mom in the past so the allotted time for mother/baby bonding was given before the veterinarian performed the neonatal exam later that afternoon.  When the calf was handled for her physical exam it was noticed that she was not as active, bright and alert as she should be.  A blood sample was taken to check her glucose level which reported that her level was low and she most likely had not nursed.  After further assessment, it was determined that she did not have a normal suckling reflex and had not made an attempt to nurse.  The decision to remove the calf and start the hand rearing process was made by the General Curator and Veterinarian.

Since infants do not thermo regulate well in the early stages of life she needed to be warmed up. She was given warm intravenous fluids to help with the warming process and to help elevate her glucose level to give her a little more energy.  Once she was stabilized and warmed to a normal body temperature, an attempt was made to see if she would nurse on a bottle.  Still, her nursing reflex was nonexistent so an alternative feeding method needed to be used.  She was then offered warm formula via oral syringe feeding. Her formula is a calf milk replacer that is commercially available for hand-rearing calves.  Small amounts of formula were put into her mouth for her to get the taste and start to swallow.  Slowly she started to respond and allowed the syringe feeding to take place.  She was fed every 2 hours around the clock since smaller amounts of formula need to be given this way so she does not aspirate the formula into her lungs.  Periodically the bottle was offered to try and see if she would nurse but it was a struggle, she just was not ready.  She became accustomed to the feedings and as she became stronger she now had an interest to start searching for a feeding like a calf should.  Still, she would search but no suckle reflex was present and the bottle was still rejected. A reintroduction with her mother was attempted but the female was no longer interested in the calf and would not allow her to search.  At day 5 it became a little less of a struggle to try and introduce a bottle nipple.  She would start to swallow some of formula when squeezed into her mouth but soon she would lose interest and she wanted the syringe.   With her searching becoming more intense I tried slipping the bottle nipple to her mouth more often. I was not giving up hope; we were making some progress towards the bottle.  Day 7 she was now pretty steady on her feet, strong and alert.  I introduced the bottle battle one more time.  To my surprise, she started to swallow the formula.  This lead to a slight suckle and then the full suckle response took over. She was now hooked on the bottle and feeding times were not going to be such a struggle or as time-consuming.  Having her nursing well on the bottle also allowed me to pass on some of the baby duties to her willing keepers.  She is growing fast and gaining weight normally.

Another milestone to be reached in her life is for her to meet the herd and learn from the other addax what it is to be an addax.  Since a reintroduction to her mother was no longer an option, we started to introduce her to Xadda.  This is an Addax that was hand reared 9 years ago because of a very similar situation.  Xadda is smaller in stature and less intimidating than the other adult females.  As it turns out Xadda is the perfect barn buddy and role model to get Pumpernickel into a herd routine.

Her next milestone was at 30 days of age when she started staying at the Zoo full-time instead of traveling home with the veterinary technician or her keepers.  She has started to be introduced to the rest of the herd slowly and still supplemented with her bottle of formula throughout the day until she is weaned at 95 days of age.

Making the decision to hand rear an animal is a decision not taken lightly.  The animals’ best interests always come first in situations like this.  It takes a tremendous amount of work, time, and staff dedication to ensure the survival of animals such as Pumpernickel.  The staff at the Buffalo Zoo takes great pride in being able to do their part in the survival of such a critically endangered species.