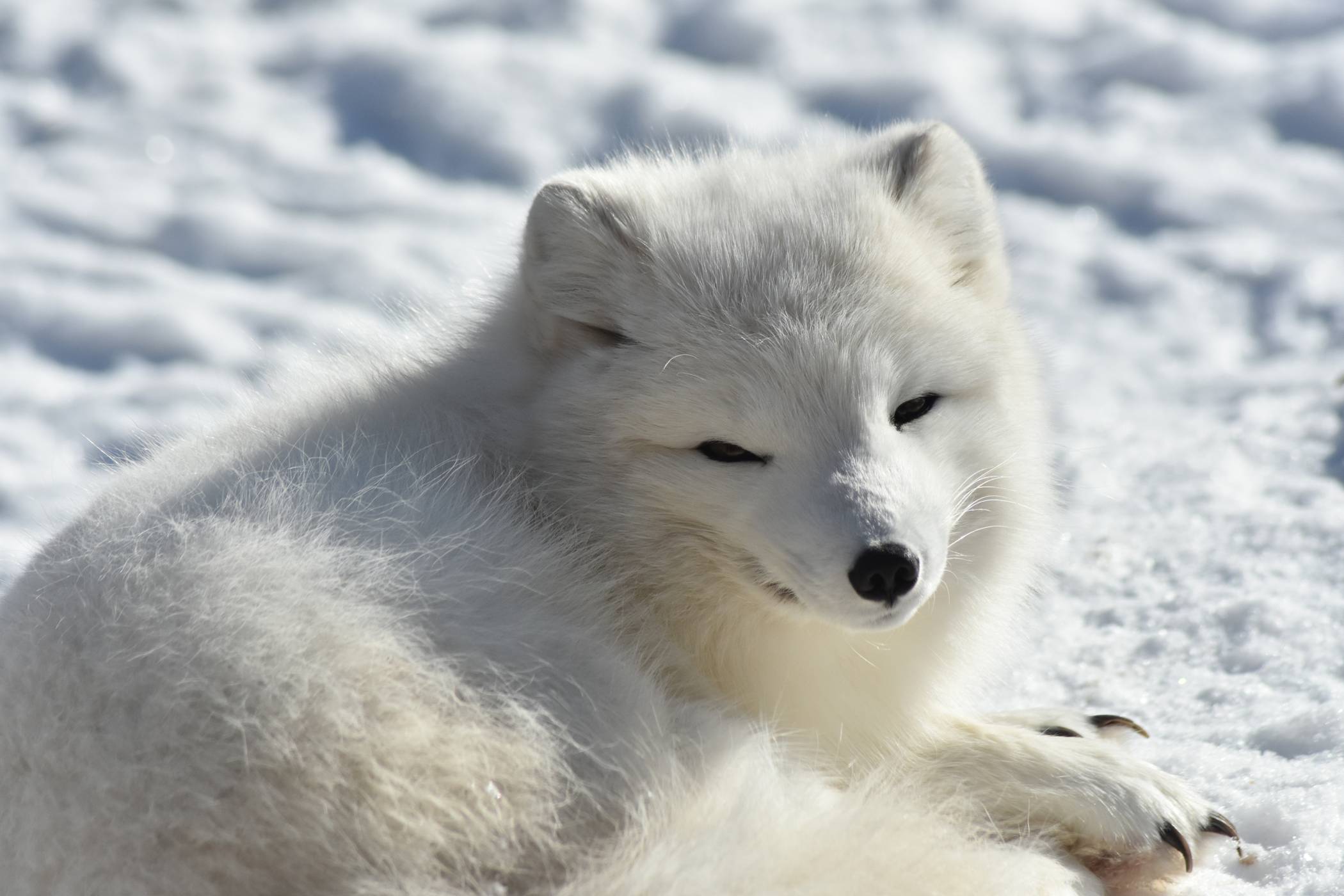 The Arctic fox is one of the most adorable animals that live in one of the harshest climates in the world, the Arctic tundra.  Here at the Buffalo Zoo, we have four male arctic foxes. The three white ones, Olaf, Kristoff, and Sven, are brothers and they will be 5 years old this spring.  Ash, the gray fox, will be three this winter. These foxes have been a great addition to the Zoo and have brought a lot of joy to the visitors in Arctic Edge.

The Arctic fox is perfectly designed to live in a tough environment. Although the iconic white fur is what most people think of when they hear Arctic fox, the white is only their winter color to blend in with the snow.  In the summer the foxes turn brown or gray to blend in with rocks and vegetation. Some Arctic foxes are born a blue/gray color.  This is a recessive trait and it is not very common. These blue phase animals are gray in the winter and almost black in the summer. Arctic foxes have round compact bodies, short ears, and a short muzzle to minimize surface area that is exposed to the cold. They also have fur on the bottoms of their paws to help insulate and to help them walk across ice and snow.  Their most important feature is their fur coat.

Arctic foxes are considered omnivores, in the wild, they prey mostly on lemmings but also eat other rodents, birds and the scraps leftover from polar bears. The will also eat vegetation if it’s available. They can live to be about 6 years in the wild and can weigh up to 20lbs.  Their main predators are arctic wolves, red fox, and the occasional polar bear. They may be cute but what makes up that cute little fox is specifically designed to help them survive in an unforgiving land.

It is said that the arctic fox’s fur coat insulates more effectively than the fur of any other animal in the world. Their winter coats are made up of two type of fur, the longer, coarser outer layer is called guard hair and the finer, denser hair in the layer below is called the underfur.  The underfur is what provides most of the insulation against the cold temperatures. The depth of the fur more than doubles in the winter time.  These hairs are hollow tubes that trap air inside and help insulate and maintain a proper body temperature. Another striking feature of the arctic fox is their big bushy tail.  The tail not only helps with balance but its main purpose is to keep the animal warm.  They can wrap their tail around the majority of their body to keep themselves warm while resting. These animals are so well adapted to the arctic environment that calling Buffalo their home seems to be the perfect fit.

If you are visiting the Zoo this winter it may be hard to tell the difference between our boys, but each one has its own unique personality that set them apart.

Ash is a blue phase arctic fox and the easiest to tell apart from the others. He is gray in the winter and almost black in the summer.   Ash used to be someone’s pet but was found running loose, was rescued and eventually came to us.  He loves attention from his keepers and the visitors at the glass.  He has a tendency to get extremely excited when he knows something good is coming.  He can let out this terrible sound like a dog in pain, but it’s just Ash being overly joyed for something.  He enjoys getting under his keeper’s feet or stealing the keeper’s tools.  He also likes to play chase with the other foxes.  He thinks playing chase is fun, but the others might not be as enthusiastic about it.  Ash loves all food! He especially loves cat treats or peanut butter and can be found all over the exhibit.

Olaf is the only white fox of the three that will come up to the window to visit with our guests.  He is the bravest when it’s feeding time and will come right up to his keepers for food.  Olaf tends to play with Ash the most.  He also loves cat treats and can be found most of the time in the back corner under the trees.

Kristoff is the smallest of all of them our foxes.  He is very laid back and likes to do his own thing. Sometimes Kristoff will steal his brother’s food, especially crickets if they are not quick enough.  You can find him normally under the tree in the middle of the yard.

Sven is the last of the three brothers.  He does not like crowds and tends to hide in their burrow when the Zoo is very busy.  He is very cautious, but he serves as the “lookout” for the group. Sven’s favorite food is their meat diet.  If he is not in the burrow then Sven can be found on top of the rocks next to the down tree.

Please come and stop by Arctic Edge this winter and visit our wonderful foxes.