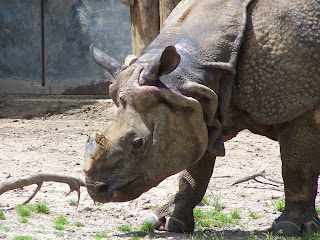 Buffalo Zoo officials announce that Henry, a 19-year-old male Indian rhinoceros, was euthanized on Thursday after his health rapidly declined.

For the last couple of weeks, the Zoo’s veterinary staff and Henry’s keepers worked around the clock to support him with IV fluids, enemas and multiple injections, as well as conferring with several veterinary experts at other reputable, accredited zoos. The difficult decision was made to euthanize him after a sudden rapid decline in his condition resulted in neurological changes and he became unable to stand.

The initial necropsy findings showed evidence of chronic liver disease and a significant digestive tract dysfunction. Samples are being sent to several diagnostic laboratories for further analysis to determine if there were any other contributing factors to his declining health.

The average lifespan of an Indian rhino in captivity is 35-40 years.

“While Henry was just beginning to enter what is considered to be ‘middle-age’ for a rhino, he was a very sick animal,” said Dr. Donna M. Fernandes, President/CEO of the Buffalo Zoo. “It is always hard to lose one of the members of our animal family. With 1,200 animals in collection, this happens several times a year. Henry received top notch care from our staff, but as can happen with humans, his life ended somewhat early due to a chronic and incurable disease.”

Henry was born at the Philadelphia Zoo on July 24, 1991. He arrived at the Buffalo Zoo on July 21, 1992. During his lifetime, Henry sired two calves at the Buffalo Zoo: Ashakiran, who was born on September 15, 2004 and now resides at the Toronto Zoo; and Clover, who was born on March 1, 2008 and is scheduled to move to African Lion Safari in Canada this summer. Their births were the result of breeding recommendations through the Association of Zoos and Aquariums’ (AZA) Species Survival Plan®. This program is designed to help threatened and endangered species maintain a healthy and stable captive population. The calves’ mother, Tashi, still resides at the Buffalo Zoo.

Found in northern India and southern Nepal, the Indian rhinoceros (also called the greater one-horned rhinoceros) is the largest of the Asian rhino species. Rhinos are typically solitary animals except for mothers with their young. Fewer than 200 of them were thought to exist in the wild during the early 20th century, but due to strict protection from the Indian and

Nepalese wildlife authorities, numbers have increased to approximately 2,500. However, their horn is revered for medicinal use in China, Taiwan, Hong Kong and Singapore. As a result, poaching still occurs, and the species remains highly endangered.

Henry was very popular with Zoo personnel and visitors, and he will be greatly missed.