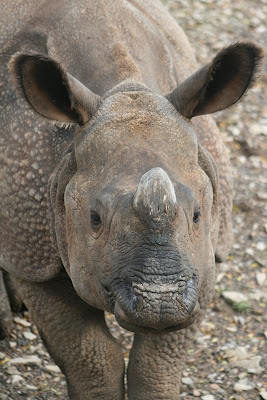 , NY – The Buffalo Zoo’s young female Indian rhinoceros, Clover, will be celebrating her fourth birthday on March 1 in her new home at the African Lion Safari in .

On Thursday, February 23, Buffalo Zoo staff bid farewell to Clover, who was born at the Zoo in 2008. Animal keepers named her “Clover” in honor of the St. Patrick’s Day holiday.

Clover was safely transported to African Lion Safari where one of her keepers from the Buffalo Zoo will also help participate in her care for the next several days to ease the transition to her new home.

Clover’s mother, Tashi, took excellent care of her young one, who was the second Indian rhinoceros to be born at the Buffalo Zoo. Clover’s sister, Ashakiran was born on September 15, 2004 and now resides at the Toronto Zoo. Clover will be paired with a male rhino at the African Lion Safari in hopes that they will breed and continue to help secure the species’ future.

The breeding of Tashi and Henry, Clover and Ashakiran’s father, was recommended as part of the Association of Zoos and Aquariums’ (AZA) Species Survival Plan (SSP), which is designed to help a species maintain a healthy and stable captive population. Before a breeding recommendation is even made, the SSP traces genetic lines of each animal and looks to see if there will be room for another rhino in an accredited facility. These efforts are made to prevent inbreeding and overcrowding at accredited zoos.

Found in northern and southern , the endangered Indian rhinoceros is the largest of the Asian rhino species. Fewer than 200 of them were thought to exist in the wild during the early 20th century, but due to strict protection from the Indian and Nepalese wildlife authorities, numbers have increased to approximately 2,500.