Day 3 (Tuesday, October 11, 2011)
Wow, what a day! My mind is whirling…but all for good reasons.
After one of our facilitators woke us up with a rendition of “Oh, What a Beautiful Morning!,” we walked to the lounge car for breakfast. The song choice was a little misleading, as we soon found out that we had to hold each door tightly while entering and exiting the cars so the doors wouldn’t be blown out of our grip! Today’s weather is certainly different with the rain, strong wind (unlike anything I’ve ever experienced!) and bitter cold. While the weather is uncomfortable for us, the polar bears certainly don’t seem to mind it that much, of course.
After breakfast, we sat down for a Skype session with Dr. Steven Amstrup, PBI’s chief scientist, who has studied polar bears for more than 30 years. In recent years, he has provided research for the U.S. Fish & Wildlife Service and the U.S. Secretary of the Interior, who in 2007 asked him to answer the question, “What is the future of polar bears?” Subsequently, Dr. Amstrup worked with a team of international scientists and together, they provided enough data to result in polar bears being added to the threatened species list in 2008. The scientists also collected enough information to predict that the world will lose 2/3 of its polar bear population in the next 40 years if we stay on our current path and don’t make any changes in reducing greenhouse gases. IUCN? 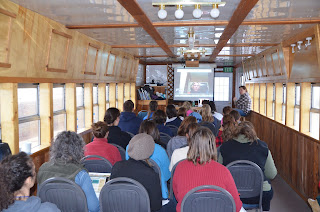 Today’s discussions were particularly interesting to me because of the controversy surrounding climate change. The notion of climate change occurring isn’t something new—in fact, it’s been understood for more than 100 years since the concept was introduced by the mathematician, Joseph Fourier. Only recently has the topic become a controversy—not so much a scientific one but rather a political debate. While the majority of scientists (whose life work involves studying the topic) believe that climate change is increasing because humans are producing more greenhouse gases, for a variety of reasons, some people feel they cannot do anything to prevent climate change from occurring…or that their actions even cause it at all.
What I appreciated most about Dr. Amstrup was the fact that he put scientific terms into layman terms to help clarify the data. He specifically cited the example of people not accepting the idea of climate change (global warming) if there is a cold spell in a place like Arizona. However, he explained that climate change is actually an AVERAGE of fluctuations in climate over a LONG PERIOD OF TIME (not just a rare occurrence once in a while). For thousands of years, weather has fluctuated as a result of many factors—changes in the North Atlantic Drift, El Nino, volcanoes erupting, etc.  However, the baseline of recorded temperatures over long periods of time has shown a steady increase. (More specifically, in the last 25 years, most surface air temperatures around the world have risen.)
What has also increased is the amount of greenhouse gases produced by humans. Now, it is important to note that greenhouse gases THEMSELVES are important…and necessary to sustain life on Earth. In technical terms, the sun provides the earth with shortwave radiation that the earth sends back to space as longterm waves. This balance has to be maintained. Carbon dioxide takes the solar energy and “bounces” it around to other things on earth that need it first—plants, etc. If people are increasing the amount of CO2 (which retains solar energy), then the longer the solar energy is “trapped.” This results in rising temperatures. Dr. Amstrup pointed out that the Laws of Physics state that as the amount of greenhouse gases rise, the world will warm. It is so scientifically evidenced that Dr. Amstrup stated that if anyone argues these Laws of Physics, he always asks them if they think people can fly in airplanes!
Scientific data shows that without greenhouse gases, the natural curve of climate shows we would be headed into another Ice Age. The best example he gave to bring all of this together was comparing greenhouse gases to a blanket. If we get too warm under the covers in bed at night, we take off our blanket to cool down. Greenhouse gases act as a regulator (like a blanket). They can help us stay warm, but if we are covered with too many blankets, there’s nowhere for the heat to escape. It is slowly released from the blanket itself…but usually not quick enough for us to maintain a comfortable temperature without becoming overheated first. Therefore, the extra layer of greenhouse gases that humans are producing are trapping in heat and causing temperatures to rise around the globe.
In 2009, more climate change reports released by Dr. Amstrup about the results of climate change resulted in a “doom and gloom” mentality among those who analyzed the findings. If the existing amount of greenhouse emissions have committed us to losing all seasonal sea ice in the future (as found in Churchill), would future greenhouse gas mitigation have ANY benefit to polar bears, who rely on this ice for hunting (and ultimate survival)? Scientists’ answer is a resounding YES. 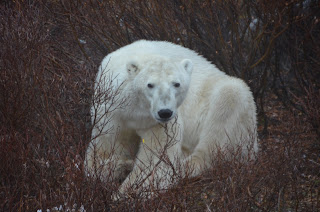 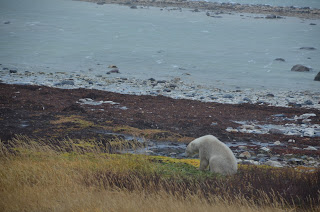 Most importantly, there are simple things that all of us as INDIVIDUALS can do to help reduce CO2 and also contribute to the survival of this magnificent animal.