The Buffalo Zoo…There’s an App for That! 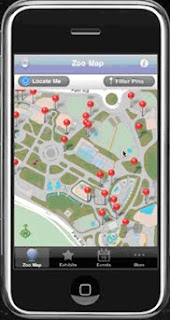 It wasn’t so long ago that your cell phone had a small display that resembled a calculator, and it was used for phone calls after you put the antenna up. But with all the technology changes, especially in recent years, cell phones are now so much more powerful. The abilities of iPhones and Droid model cell phones to not only place calls but also play video, text, hold music and take pictures have made them much sought-after devices. And now, you can even have the Buffalo Zoo on them!

As part of Erie County Executive Chris Collins’ tourism initiative, the Buffalo Zoo and Odysseus Mobile Computing have collaborated on a phone tour unlike any other. While other cell phone tours act purely as audio guides around an attraction, the Buffalo Zoo’s “app” provides visitors with a new interactive experience.

Using all the smartphone capabilities, this new Zoo tour not only tells you where everything is located, including exhibits, gift shops, concession stands, but, it also incorporates built-in GPS technology, so visitors can be guided around the Zoo.

The app opens with a map of the main animal exhibits, and from there, you can tailor your Zoo experience. The tour is more than just a digital map. One tap on the exhibits tab reveals the list of the animal exhibits. Pick the one you are interested in, and one click later, you get fun facts about an animal species, its origins, directions to its exhibit and video of the animals themselves. Visitors who wish to add the premium content for $0.99, can also download keeper talks to hear about individual animals and learn more about their distinct personalities and likes and dislikes.

Want to play your Zoo visit even before you get here? The events tab reveals all the planned tours, keeper talks and schedule of activities and other encounters on a given day. All of the Zoo’s special events can be found here, including information on Howl-O-Ween Hayrides.

Other visitor information, including Zoo hours and admission prices, Beastro and Zootique hours, the history of the Zoo, conservation tips, details on memberships and even how to follow the Zoo on Facebook and Twitter, are all in the Zoo’s app as well.

To reach out to the increasing number of international tourists who visit the Western New York region each year, information about the animals and visitor amenities is available in six languages, including English, Spanish, French, German, Mandarin and Japanese.

The Buffalo Zoo app is offered in the Droid marketplace for Droid model phones and on iTunes Store for use on iPhones.